What was the last commandment that Jesus gave his followers? It was this: "All authority in heaven and on earth has been given to me. Go therefore and make disciples of all nations, baptizing them in the name of the Father and of the Son and of the Holy Spirit, teaching them to observe all that I have commanded you; and behold, I am with you always, to the close of the age." Matthew 28:18-20.

How Do You Go Forth and Make Disciples?

In order to make disciples, you must first be a disciple of Jesus Christ. What exactly does that mean?

Are you a Disciple?

Before you answer that question, consider what it means to be a disciple. Most believers identify themselves as "Christians." A disciple is a student, apprentice, or follower who emulates the example set by a master and seeks to identify with the master's teachings. To be a disciple involves a conscious and deliberate choice to surrender our own will and to follow Jesus Christ. Simon Peter had such a moment when, in response to an invitation, dropped his fishing nets, left everything, and followed Jesus. Luke 5:10-11. This is not easy to do. In response to a potential follower who first wanted to say farewell to his family, Jesus told him that "No one who puts his hand to the plough and looks back is fit for the kingdom of God." Luke 9:62. In today's culture, being a disciple of Jesus practically means that we apply the teaching of the Lord and His Church to every aspect of our lives. It means worshiping and loving the Blessed Trinity with all your heart, soul and mind, and loving your neighbor as yourself. Are you there yet? Most of us are not.

ChristLife is a Three-Step Process to Facilitate Discipleship. 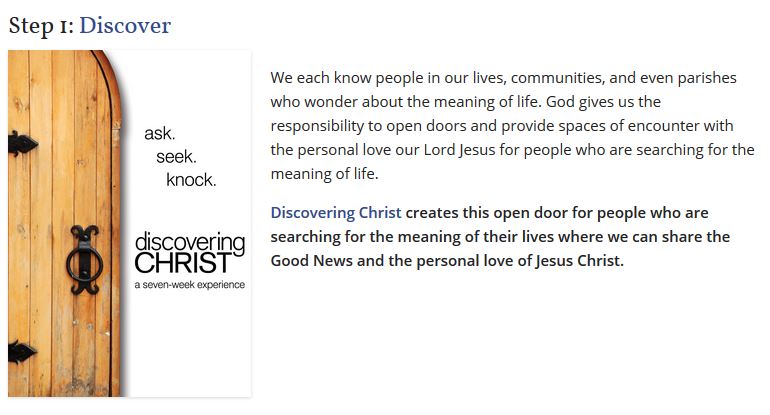 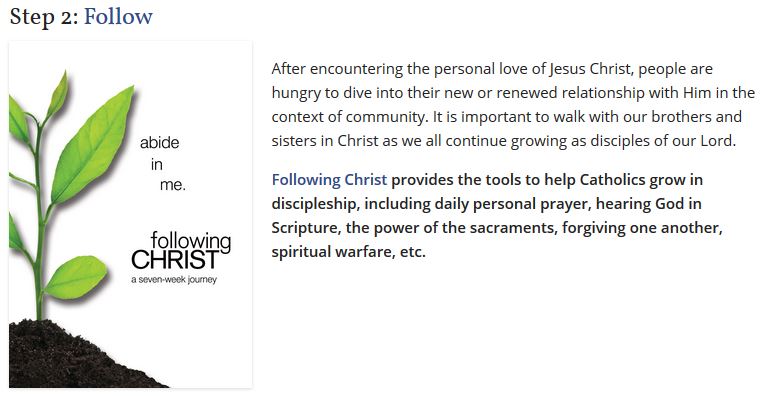 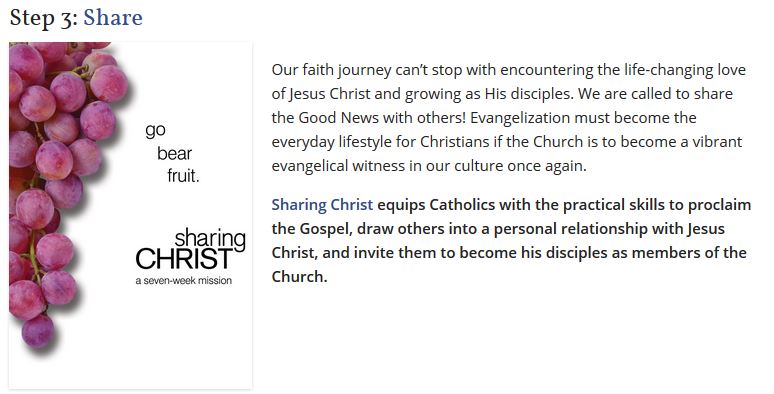 The General Conference of the Bishops of Latin America and the Caribbean met in 2007 in Brazil and produced what is known as the Aparecida document. It is a very important document that was influenced by Cardinal Jorge Bergoglio, who would later become Pope Francis. The document generally addressed the mission of the Catholic Church in Latin America and the Caribbean. However, the conclusions and observations have universal application. One of the topics addressed the four most common reasons given by Catholics who had left the Church to join other religious groups. The reasons included:In Discovering Christ, we will explore what it means to have a personal encounter with Jesus Christ in a format that will foster a sense of community. There is no better way to get to know your fellow parishioners than by sharing a meal and sharing your own personal faith journey experiences in an intimate setting. In each of the courses, there will be teachings that will help to facilitate spiritual, personal and community growth. The ChristLife Series culminates with Sharing Christ, which will focus on practical ways to go forth and make disciples, thereby building a missionary commitment in our parish community.

To realize the importance of being missionary disciples, consider the alarming percentage of young Catholics who either became unaffiliated with any religion or who left for another religious group. Pew research found that of those who became unaffiliated, 79% had left the Catholic faith by age 23.  For those Catholics who joined other religious groups, 66% had left by age 23. It should be clear that our Catholic faith is not passed on to our children through the bloodstream. While there is much work to be done, it can start in our homes with our kids with this thought in mind:

What is not believed or lived cannot be transmitted. . . .  The Gospel can only be transmitted on the basis of "being" with Jesus and living with Jesus the experience of the Father, in the Spirit; and, in a corresponding way, of "feeling" compelled to proclaim and share what is lived as a good and something positive and beautiful.

Who Should Attend Discovering Christ?

Everyone is welcome, Catholic and non-Catholic. You do not have to be a member of St. Francis of Assisi Catholic Church to attend. Our doors are open to anyone who is seeking a deeper and more personal relationship with Jesus Christ, or to anyone who wants to ponder the meaning of life.
Proudly powered by Weebly